All my praise is due to Allah that made it possible for me to publish biographies of elite and renowned figures in Iran’s art and culture, specifically in Jurisprudence, literature, mysticism and art. I have been in contact with one of our greatest personalities, Mr.DJavad Hamedi Hagh, during three past years; however, during this time I could not find a chance to keep a record of activities and services he has done in art and culture in his lifetime. Finally, I convinced him to give me a summary of his life record in one page…..

He was born in Tabriz in June 1940 in a faithful and trustworthy family. After graduating from high school in Tabriz as the first grade and succeeding in exchange program for abroad studies, he moved to Germany to continue his studies in 1958. He received his BS in Civil Engineering and his Masters in Architecture from ……. University and returned to Iran to serve his nation and his country so he led 48 years of service and accomplished 3208 constructional project all around Iran.
He could receive international ISO license from Sweden, Norway and Switzerland as well as his PhD in Management. He has also authored six valuable and influential books in management field.
He is interested in studying and doing research in various fields as mysticism, social cultural and religious works, environment, ethics, and life of mystics and pious figures; an interest which made him compiler of sixty-one books, twenty-one of which have been published by now and four others are in the process of publication. All these books turned to be valuable references for researchers and students.
He believes that serving people without pretentious and hypocrite gestures is the accepted worship of God. “Stop worthless effort for the least worthy goal!”, he says. Some other quotes from him are as, “If you praise people you will not be able to praise God”; “Heresies and superstitions are obstacles to receiving the Truth”; “your body should not move before yo

My life has passed and my hair turned gray
My spring turned to fall before not knowing enough.
Oh Hamed! What is the secret of life?
Work and serve! Love! Be transparent!
And to One God Pray.
Works:
1. Two essays by Abol-Ghasem Baghdadi, 1960
2. The Culture, Rites and Manner of Dervishes and Khaneghah, 1961
3. Biography of Ali Akbar Basiri Shirazi, 1971
4. Biography and a report of writings of Majd-odin Baghdadi Kharazmi Irani
5. Agricultural Buildings, 1975
6. Project Management System based on PSC and CPM, 1973
7. Principles of Management and Supervision, 1973
8. Biography and Writings of Amir Sayed Ali Hamedani, 1974
9. Reasons of Tehran Population Growth, 1981
10. Benefits of Wudhu, 1993
11. Khaneghah in Past and Present, 1995
12. Masnavi-Al-Misbah Sheik Rashid-odin Mohammad Esfaraini, 2003
13. An Interpretation of Surah Ikhlas (the Unity), 2008
14. A Summary of Hajj Rites of Passage and commentary on Surah Ikhlas (the Unity), 2008
15. Structure of Feasibility Reports for Constructional Projects, 2010
16. Executive Details in Architecture, 2010
17. Executive Details in Constructions, 2011
18. Executive Details in Civil Engineering, 2012
19. A Collection of Construction Projects Contracts, 2014
20. Executive Details in Electrical and Mechanical Installations, 2014
21. Modern Methods of Management in Constructional Projects and Workshops, 2014
22. Praying to God, 2014
23. A Collection of Mystics Portraits: 302 paintings and biographies and 150 Khaneghah, 2015
24. Stage One, Two and Three of Management in Constructional Projects (Master Thesis), 2015
25. A Comprehensive Biography of Abdolhamid Ganjavian (Mir Borna), 2016
26. The Garden of Hamed: A Collection of Poems by Djawad Hamedi Hagh, 2016
27. Biography of Sheik Dervish Mohammad kardehi (Pir Pareh Dooz), 2016 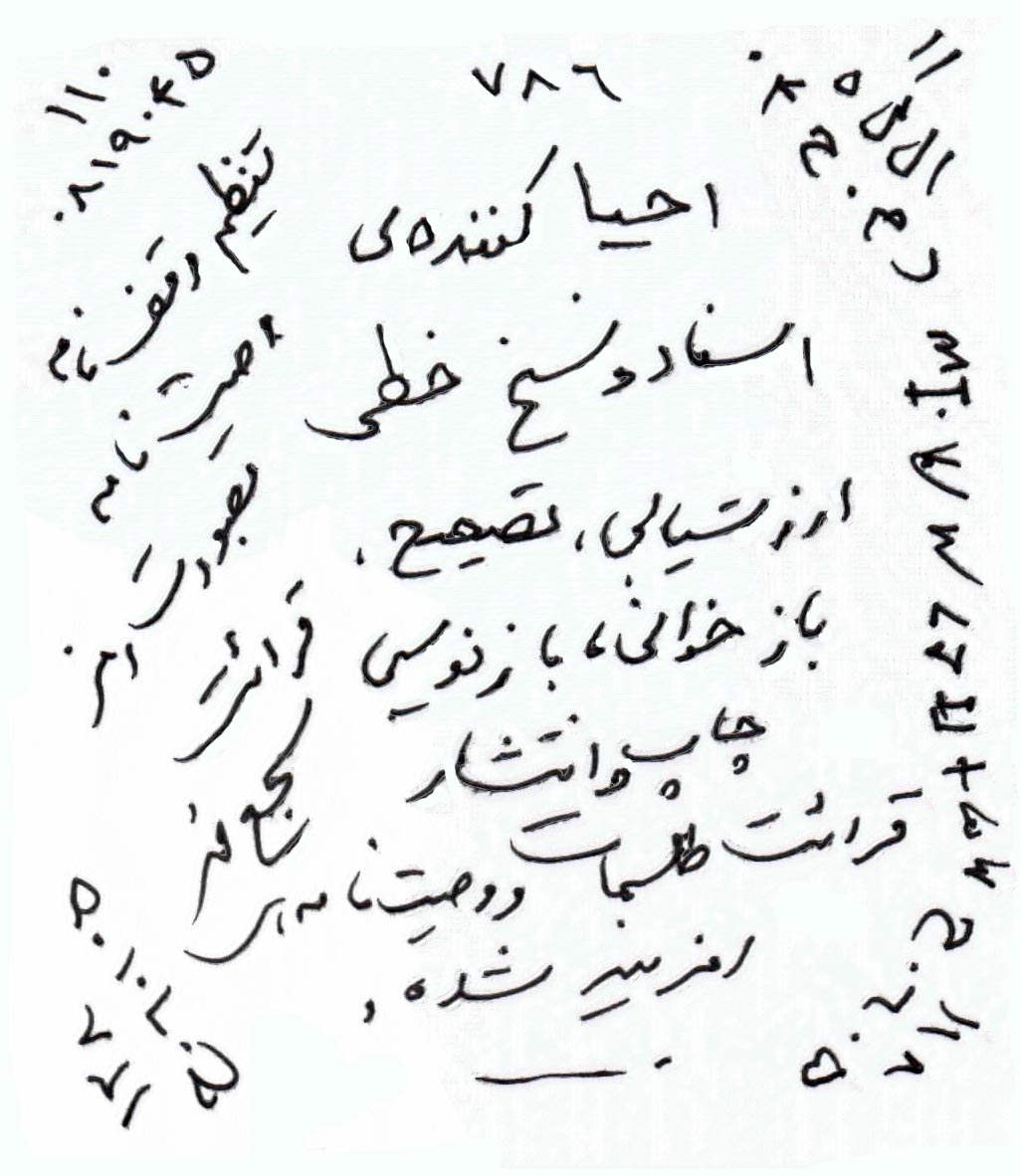